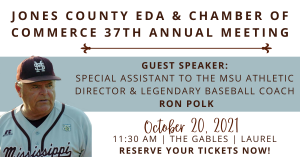 Register NOW for the Annual banquet. This year we are joined by special guest speaker Ron Polk. Seating is limited so be sure to reserve your spot soon! 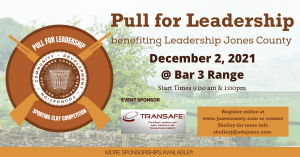 Join the 2021/2022 Leadership Jones County class at Bar 3 Range on December 2 for a sporting clay competition! All proceeds go to support the Leadership Jones County program. We have sponsorships available and additional shot packages! There will be prizes for the winners and a shell pull for the big raffle prize! Don’t miss out on the fun! Contact Shelley Jones for more information or to register a team. 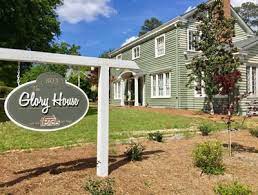 The Glory House in Laurel MS has made it to the final round of the State Farm neighborhood Assist Grant program!!!  You can vote for them 10 times a day to help them win!  VOTE HERE!!!

The Glory House offers a variety of different community resources, including: a food pantry, community meals, kids camps, Christmas assistance, elder care, ESL classes, and disaster relief response. They faithfully serve the people of Jones County and this is a wonderful opportunity to serve them back! Vote for the Glory House daily until August 27th!

The Mississippi Small Business Development Center will be offering a FREE webinar on Wednesday, August 25th. Former State Economist, Darrin Webb will be presenting an overview and briefing of the current state of the Mississippi economy and business outlook. Register for this informative event HERE. 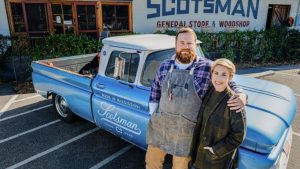 It is no secret that Laurel and Jones County have seen a big influx of tourists since the show aired. Each year we see their popularity grow and new states appear on the license plates driving around town. The buzz and excitement surrounding the show has encouraged small business owners and brought a new wave of customers to our area. Jones County has certainly benefited from Ben & Erin’s hard work and we thank them for their investment in the community!

Read the full press release from Discovery below.

New York [August 9, 2021] HGTV has picked up 20 episodes of fan favorite series Home Town after it attracted a whopping 32 million viewers during its last season. Starring home renovation experts Erinand Ben Napier, the series will spotlight the couple as they bring new life to outdated homes in Laurel, Mississippi, and navigate their busy family life as parents of two. In addition to airing on HGTV in early 2022,  the new season of Home Town also will be available to stream on discovery+. And, following its successful debut on the streaming platform, the exclusive series, Home Town: Ben’s Workshop, has been picked up for a new season of 10 episodes. The series spotlights Ben as he welcomes celebrity guests to his real-life workshop.

“I’ve always loved the bigger projects we do for Home Town because Erin and I help make a difference for homeowners and for entire neighborhoods,” said Ben. “Now I have the added bonus of sharing more of my passion on Home Town: Ben’s Workshop. Showcasing the patience and detail that goes into woodworking with fans who wanted to see more of that process is a dream come true.”

The couple, who have more than one million followers on social media, will continue their mission to revitalize their small town one home at a time using Erin’s artistic vision and Ben’s woodworking prowess.

“Home Town is not just about renovations, it’s about the power of community,” said Jane Latman, president, HGTV. “We love that the series delivers great ratings in all key demos, season after season, but it’s the inspirational message about neighbors working together, as well as Ben and Erin’s enthusiastic fans, that have helped HGTV build yet another breakout franchise.”

We have been working hard not only to make Women In Business an informative and enjoyable event, but also as safe as possible for all attendees. We will have limited seating available to allow for social distancing so be sure to register soon!  Please see the below health and safety precautions in reference to this event.

Vendor spots are now open for our 2021 Women In Business Forum!

Do you offer a service for women-owned businesses? Reserve a vendor space and interact with potential new clients during the event! Only $50 and includes one ticket to the Forum!Download the vendor form and return to amandar@edajones.com by August 13. The $50 vendor free includes 1-ticket for the WIB Forum and Luncheon; 1-6’ unskirted table; 2 chairs

The Jones County Chamber of Commerce has partnered with the Mississippi Department of Employment Security to host the I-59 Job Fair on September 16th. The registration deadline for companies to have a booth is September 3. The Job Fair will be inside the Sawmill Square Mall in the old JCPenny space. Find more information about how to register your company HERE.

Advertise on the Visit Laurel – Jones County app & reach 1,500 visitors a week! The Dixie Youth World Series welcome bags will include information on how to use the Visit Laurel-Jones County trip planning app. This is where players and parents can access complete lists of where to eat, shop and explore. Plus there will be a featured Points of Interest list that will have details on registration, opening ceremonies, games and wherever YOU want to lead them to in-between! We are offering two ways to gain exposure for your business. The first is by purchasing Ad space on the “EAT” or “SHOP” list for $50 an ad. The second is by purchasing a featured stop on the World Series Points of Interest List. To purchase one or both of these ads, click HERE! 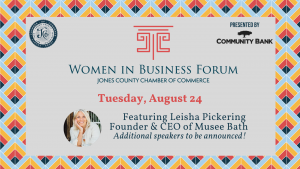 Mark your calendars for August 24th! The 2021 Women In Business Forum brought to you by Community Bank is a must attend event.

The Keynote speaker for the 2021 Women In Business Forum is Leisha Pickering, Founder and CEO of Musee Bath. Leisha founded Musee Bath with a wonderful mission at its core. Musee makes handcrafted, natural bath products in Madison County, Mississippi with the mission of restoring lives by providing dignified work for vulnerable people in the community. They primarily hire women in recovery, people with disabilities, and people who have lived in chronic poverty. Musee products are handmade in the USA with ethically sourced, natural ingredients. Musee bath balms are cruelty-free, paraben-free, and sulfate-free and safe for all skin types. Leisha is sure to be an absolutely wonderful keynote speaker.

This event is not just for women. Our Women in Business Forum is a great educating tool for EVERYONE in the workforce.  If you are a working woman, boss of women, or coworker to women, you are invited to the Women In Business Forum.

We will be announcing some additional speakers soon so watch for updates!  Secure your seat at the forum by registering online HERE.