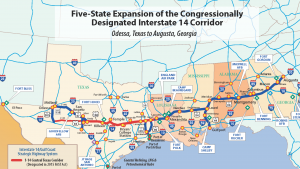 On Tuesday, August 3, the U.S. Senate unanimously approved an amendment adding congressional authorization of the full Interstate-14 five state corridor expansion to the pending Bipartisan Infrastructure Package. The completed I-14 would run from Midland-Odessa, Texas through Laurel and end at Augusta, Georgia.

“Interstate-14 being included in this package will benefit Jones County for generations to come. Proximity to Interstates is one of the top factors large industries look for when choosing areas to expand into. This major infrastructure advancement will allow us to compete at a higher level.” said Ross Tucker, President of the Jones County Economic Development Authority.

We have seen lobbying efforts from counties, cities, and economic development professional across the route in efforts to have this amendment passed. It is wonderful to see the hard work pay off.  The Bipartisan Infrastructure Package still must move through the House of Representatives and the Oval Office before becoming a law.